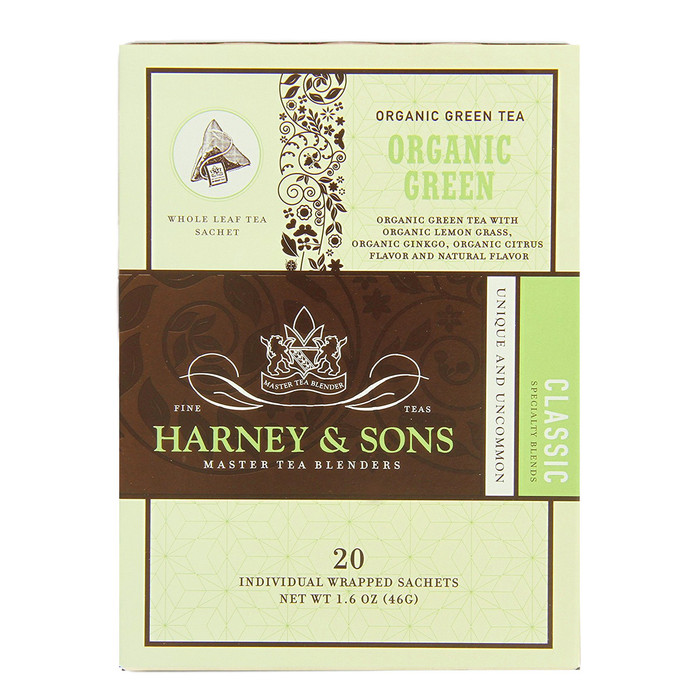 Harney & Sons Organic Green with Citrus & Ginkgo is a blend of hand-picked organic green tea from Southern India, organic lemongrass, organic ginkgo, organic citrus oil, and natural citrus flavor that delivers a refreshing and slightly earthy taste. This brew of vegetal and citrus flavours delivers antioxidant benefits thanks to green tea and gingko biloba. This package incudes 20 silken sachets that are individually wrapped in beautiful packages which makes it a great choice to have when having guests over. It is Kosher and USDA Organic Certified.

The Harney & Sons story in the tea industry begins 30 years ago in Salisbury, Connecticut, when John Harney, developed a passion for fine teas and the art and craft of tea blending. John began his own journey in mastering the craft of tea blending. He produced and served his distinctive blends that were becoming more and more popular among the tea drinkers. His small back then home-based business turned to be a global company covered by popular names like Oprah and Dr. Oz and served at five-star hotels such as Four Seasons Hotels, Waldorf Astoria New York and other luxurious establishments. Harney & Sons Fine Teas sources, blends, and packages its own teas and has more than three hundred varieties. The company remains committed to delivering a superior quality teas that the consumers would truly indulge to delivery luxury to the everyday life.